Starting tomorrow in the newspaper: Het Belang van Limburg, I'm running the series 'Fields 2.0 - The Home Stretch'. It is a series of  twenty five drawings and all of these put together, will make up an animation with an absurd twist.

The entire thing is exactly one second in duration (twenty five frames) and is build up out of five separate strategies. More info will be in the accompanying short interview that will be in the paper. I will post it here  tomorrow.

The series will run for two to three weeks, so if you want the animation for yourself start collecting.. 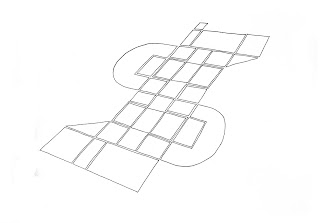 Field - Zero 2011 (not included in the series)
The animation itself as a video, will be put on here after the series in the paper are finished.
Posted by Vanuytrecht Tom at 11:13 AM